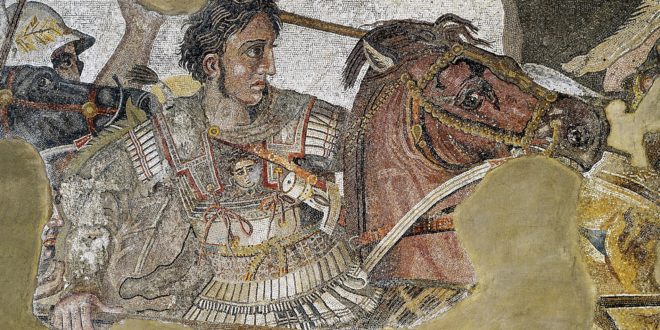 Unity, for a time and a philosopher king, of sorts, finally came to Greece from Macedon in the north. In the year 356 Alexander was born.

Macedon under King Philip, Alexander’s father, was already recognised as a rising power. At Athens the aged teacher of oratory Isocrates (b. 436) hoped that Philip would unite the Greeks in a new crusade against Persia. The orator Demosthenes (not to be confused with the general who died in the Sicilian expedition) was for resisting Philip. He flayed the King of Macedon in a series of orations which have given us the word philippic (= a furiously hostile speech, a tirade).

Meanwhile Alexander of Macedon was growing up and needed the best teachers. Plato had died in 347 but his distinguished pupil Aristotle (b. 384), a native of Macedonia, was available and was appointed tutor to the young prince. Thus at the age of sixteen, Alexander was in the enviable position of being in daily contact with one of the most brilliant intellects the world has ever known, of ruling Macedonia while his father was away and of possessing an incomparable horse, Bucephalus. Two years later (338) he fought by his father’s side at Chaeronea, where the assembled states of Greece were beaten and lost their independence. (Demosthenes ran away with the rest of the Athenian contingent. He had done his best. Isocrates committed suicide).

In 336 Philip was murdered, so at the age of twenty Alexander of macedon found himself king and commander of the superb army which his father had created.

Using and improving this army Alexander conquered the Persian Empire. Three great battles (Granicus 334, Issus 333 and Arbela 331) and the sieges of Tyre and Gaza achieved this (332). Darius III fled. Unlike his ancestor, Darius the Great, he had no need of a slave to whisper reminders about the Greeks into his ear. The Greeks were hot on his heels, but they did not catch him. Darius was killed by his own followers. Alexander only found his dead body.

Egypt had not been a hard nut to crack. The Egyptians did not mind exchanging one conqueror for another and their docility earned them a rich reward. Alexander ordered a city and harbour to be built at the western end of the Nile delta (331). Like many others which he founded, it was to be named Alexandria. In time it supplanted Athens as the centre of the Greek world.

Long before Alexandria had begun to take shape its founder had hurried on, never to return. He was well received in Babylon (there too the Persians were not loved), burned the palaces of the Persian kings at Persepolis and in the following years pushed north as far as Samarkand and through the Khyber Pass to the Indian sub-continent. He won a battle there over King Porus who had elephants on his side, but when he wanted to press on eastwards his soldiers would not let him. They made him turn back. He seems to have become reconciled to the idea of going no farther east, since it was an expedition south, into Arabia, which he was planning, when he suddenly died, at Babylon, aged 33, from fever contracted after a banquet (323).