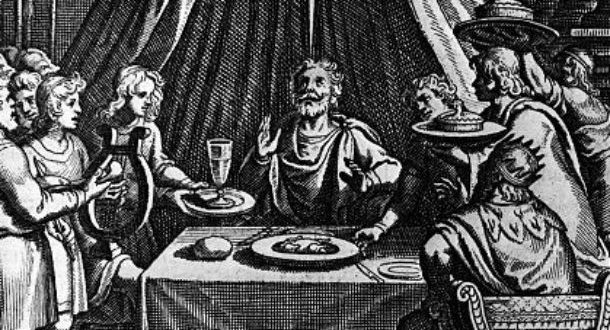 Damocles’ sword. Twice in Greek history the Spartans appear as heroes — when they fought under Leonidas in the pass of Thermopylae and when they marched under Xenophon from Babylon to the Black Sea. The rest of the time we are continually hearing of their Victories but never of their achievements. As the fifth century gives place to the fourth it is still the same story. Sparta has beaten Athens at last. Sparta is supreme, but nothing spectacular happens. She does not succeed in uniting Greece.

In 371, as a result of the battle of Leuctra, Thebes began a brief period of supremacy, which lasted until 362, when her leader Epaminondas was killed.

Unity was as far away as ever in mainland Greece and the Aegean, but in the west Dionysius of Syracuse (b. 430 – d. 367 — not to be confused with Dionysus, God of Wine) had stopped the advance of the Carthaginians and imposed his will on the Greek cities of Sicily and southern Italy. Most would have preferred disunity to the cruel discipline of Dionysius.

According to one story he arranged a banquet for his courtier Damocles, but had a sword suspended above him by a single horse-hair. This was intended to impress upon Damocles, who had flattered Dionysius, the truth that the happiness of a wealthy and powerful ruler was not unmixed with anxiety. The hair held and the sword did not fall; but Damocles found himself unable to enjoy his dinner. He had learned his lesson.