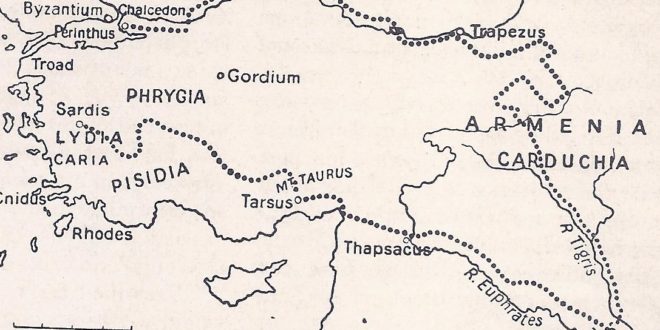 The march of ten thousand

The other author who tells us about Socrates is Xenophon. We owe him much. In addition to writing down what he remembered of conversations with Socrates, he wrote a short account of the Peloponnesian War after 411 (Thucydides only completed his history up to that year, although he lived until 400 B.C). His most famous work was the Anabasis (“March up Country”). This describes how (401 B.C.) he joined a Greek force which had been hired by Cyrus, brother of the Persian King, in the hope of seizing the throne.

The fact that Cyrus had been the ally of Sparta and that this mercenary force contained a large body of Spartans did not worry Xenophon. Cyrus led them and a large Persian army inland from Sardis and after a time made it clear that his object was to seize the throne of his brother, Artaxerxes, King of Persia.

The “Ten Thousand” (we remember the Greek contingent by their numbers) marched through Asia Minor and along the Euphrates to Babylon together with the rest of the rebel army. Outside Babylon there was a battle in which Cyrus was killed. Soon afterwards the Greek generals were murdered and Xenophon found himself in command. He could not move back along the Euphrates, the way they had come, because no supplies were available. So he went north through the highlands of Kurdistan.

After months of great hardship the advance guard’s cry: “The sea! the sea!” was passed excitedly down the straggling column and gave the men new hope. They had reached Trapezus (Trebizond), a Greek colony on the Black Sea, whence many were able to return home (399).

However, the story of this remarkable journey cut no ice at Athens and Xenophon was banished for having helped Cyrus, the friend of Sparta.

After that he made his home with the Spartans and sometimes fought for them. He wrote a number of books in addition to the Anabasis. Some are not very interesting, but Xenophon’s are the earliest ordinary Greek books which we have. All the authors mentioned so far in this “Outline” –the poets, the tragedians, the historians — were extraordinary. It is pleasant for a change, to have a book about dogs and a book which includes instructions on household management. Xenophon believed in transferring the orderliness of military life to the household which his wife took charge of when at the age of fifteen she married him. Pots, pans and even boots were to be arranged in neat rows. Everything had its proper place — best clothes, ordinary clothes, weapons, blankets, corn, wine and equipment for spinning, bread-making or washing.

Xenophon also lectured his wife about make-up. He was against it; he said the way to get colour into your cheeks was to work hard in the house, to mix flour, knead dough and shake out cloaks and bedding.

The Anabasis, though the record of a splendid achievement, is rather heavy going for the reader of to-day; but if, as some think, it was read by Alexander, he may have learned from it lessons about Greek strength and Persian weakness which eventually took him from Macedon to the Indus.