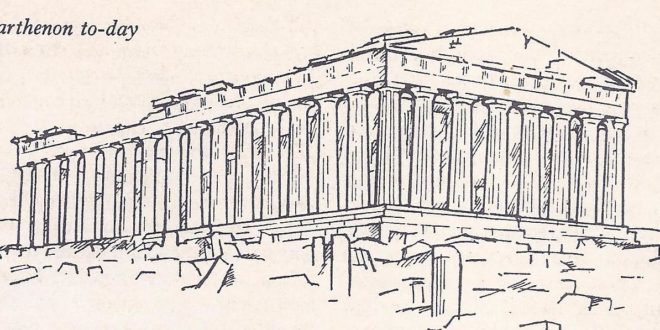 In the year 437 the Parthenon, which had been begun ten years before, was far enough advanced to contain a gigantic statue of Athena by the sculptor Pheidias. Enough of the Parthenon still survives to give an idea of how it must have looked when it was new and a visit to the British Museum will fill in the details. Here some of the sculptured figures which adorned the temple may be seen. They are known as the ‘Elgin Marbles’ because Lord Elgin brought them back from Greece in 1802-4 to save them from Turks, who then ruled the Greeks. Now that the danger is past, the Greeks would like them back.

Pheidias, who supervised their construction, would not necessarily have regretted that Athens had lost them. The Athenians treated him very badly. After his work was finished he constructed the statue of Zeus at Olympia (one of the ‘seven wonders of the world’) and thereafter returned to Athens. Enemies of Pericles, whose friend Pheidias was, then tried to attack Pericles through him. He was accused of impiety. It was alleged that he had introduced his own likeness and that of Pericles into the scene of Athenians fighting Amazons (tough mythical women) with which the shield of Athena’s statue was decorated. It was not a flattering portrait. He had represented himself as a bald old man about to heave a stone. He was put in prison and died of disease there in 432, the year in which the Parthenon was finished.

The name ‘Parthenon’, by which Pericles’s famous temple later came to be called, is derived from a Greek word meaning ‘maiden’. It was dedicated to the Maiden Goddess, Athena and the gigantic statue of her was its greatest treasure. No trace of this statue now remains, and perhaps this is just as well, since it seems from the surviving descriptions to have been not at all in keeping with the Greek ideal of “nothing in excess”.

The statue was about 40 feet high and made of wood covered with thin gold plate, which could be removed if it were needed to replenish the treasury. The face, hands and feet were of ivory and Athena wore an ivory breast-plate on which the head of Medusa, the gorgon, was carved. Her shield bore the unfortunate scene of the Athenians fighting the Amazons which had brought Pheidias into trouble. In her right hand she held a statue of Victory, itself some 6 ft. high. Even her sandals told a story. On them were wrought pictures of the mythical battle between the Centaurs (half man, half horse) and the Lapiths. Perhaps the effect was splendid. One must not forget that this statue was the work of Pheidias, though it was suggested to be rather vulgar.

The year 432, when the Parthenon was finally completed and Pheidias died, was the year in which events occurred which led to the outbreak of the disastrous Peloponnesian War.

Share
Previous Herodotus, The Father of History
Next Thucydides