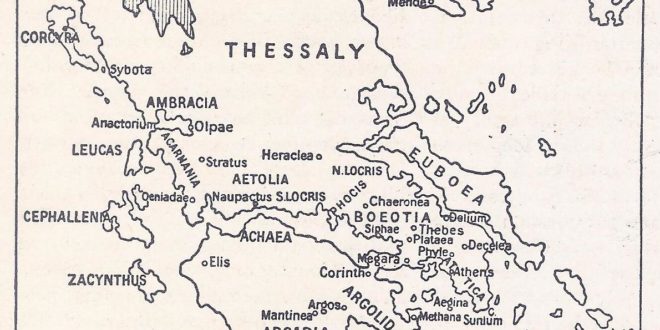 The Peloponnesian War began because Pericles was running our of time. In the first place Athens insisted on backing Corcyra in a quarrel with Corinth (435). Corcyra was a Corinthian colony and the mother-city resented interference in the dispute, particularly since it brought Athenian ships round to the western coast of Greece where they could interfere with the trade route to southern Italy.

The second trouble-centre was also a Corinthian colony, though a tribute paying member of the Athenian Empire — Potidaea in Thrace. Now that Athens saw trouble brewing with Corinth she insisted (432) that Potidaea should get rid of the Corinthian magistrates who came year by year from the mother-city, should give hostages and knock down the city wall. The Potidaeans then revolted. They received support from Corinth, while the Athenians sent a force to subdue them.

Corinth was a member of the Spartan alliance, so the Peloponnesian War had in fact begun. The only remaining question was whether it could be localized — confined to N.W. and N.E. Greece. The Spartans called together their allies — all the Peloponnesian states (except Argos); Corinth, Megara and Boeotia (except for Plataea) — and decided for general war.

Pericles on his side made no great effort to preserve the peace. On the contrary, he insulted and injured the Peloponnesian alliance by excluding all Megarian produce from the Athenian Empire.

He did not want war in order to obtain personal success as a general. He had had plenty of that when he was younger and he was now over sixty. He wanted Athens to remain powerful and he believed that she must therefore not only protect what she already had — her Aegean Empire, but must also reach out westwards towards Italy and Sicily. Rather than abandon his plans he was prepared to go to war. Perhaps too he felt that, if there was going to be a war sooner or later, it ought to be sooner, so that he could run it. He had made his plans for the Peloponnesian War.

In May 431 the Spartan army marched into Attica. Pericles intended to avoid a land battle with the Spartans. This plan was not popular, but the Athenians accepted it. They had been accepting plans made by Pericles for some forty years.

Share
Previous Why Did Athens Fight Sparta
Next Athenian Death