Home / Hellenes - Ancient Greece / Decelea, a Thorn in the Flesh 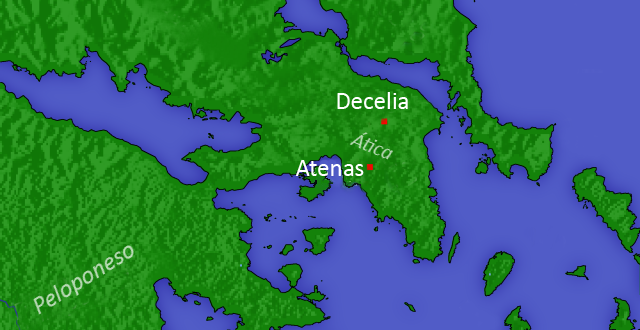 Decelea, a Thorn in the Flesh

Decelea near the border of Attica and Boeotia was fortified by the Spartans (413). The first piece of good advice which Alcibiades gave the Spartans was to send Gylippus to Syracuse. The second was this: “Restart the war; but don’t just invade Attica for a few weeks of the year. Fortify a position on Attic soil and hold it.” (Gilbert Murray’s translation).

Raids from this post made the growing of crops more difficult than ever and cut the route to Euboea, where the cattle and goats had been sent for safety. An attack on Athens itself had constantly to be guarded against.

The silver mines at Laurium had to be closed and thousands of slaves slipped away to Decelea as deserters. (There may have been more slaves than citizens in Athens and though they were protected by the law and were less badly off than elsewhere in the Ancient World, plenty were ready to leave.)

The sufferings inflicted by the Decelea garrison were only beginning when, late in the year 413, a barber in the Peiraeus welcomed a customer who had just arrived in the port. This customer mentioned the Athenian disaster in Sicily, little knowing that he was first with the news. The Athenians put him in prison for spreading false rumours; but they soon knew he had told the truth and as the news spread among the subject islands and cities of the Aegean they began to make plans not so much for freedom, which was not a practical proposition, but for a change in allegiance.

Persia was waiting. She still regarded Ionia and the islands as hers and Sparta was delighted to let her have them on condition that the Persian fleet took over the responsibility of fighting Athens at sea. Thus, in spite of the fact that Athens no longer exacted the tribute, only Samos, of the more important subject states, was persuaded to remain loyal and provided a base for the Athenian fleet during the closing stages of the war.

Share
Previous Hecuba, Queen of Troy
Next Oligarchy and Athens in Defeat