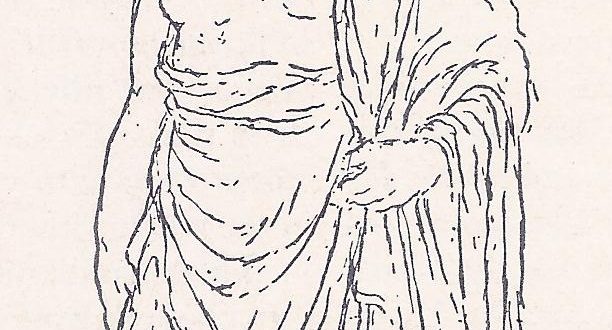 Socrates was short, ugly and brave. He served as a hoplite in the Peloponnesian war and on one occasion saved the life of a rich and handsome young recruit. It was the proper thing to do of course, but one’s admiration is tinged with regret, for the recruit whom Socrates rescued was Alcibiades. The time was now approaching when many Athenians would curse that name.

The strange thing is that, throughout these first ten years of the Peloponnesian War and the worse ones which were to follow, one of the wisest and most lovable men who has ever lived was a citizen of Athens and saw service in her armies. Though Aristophanes guyed him in a comedy called the Clouds, Thucydides does not mention his name. He was not then thought to exercise an important influence upon the state’s affairs. Later, as will be seen, he was thought to exercise far too much.

This man was Socrates, born in 468. His mother was a midwife, his father a stonemason and Socrates probably began life as a worker in marble or stone. There was a group of sculpture on the Acropolis which was said to be his work, but he soon gave up his trade and devoted himself to philosophy.

The word “philosophy”, which is made up of two Greek words meaning “love of wisdom”, covered the whole of knowledge in those days. “Philosophers” included people we would call scientists or mathematicians (e.g. Thales and Pythagoras). Socrates was not one of those, nor was he one of the sophists, people who made money by giving lessons in debating. His method was informal conversation, unpaid. He would get people talking in a gymnasium (openair athletics centre) or in a workshop or in the agora (city centre and market) and by quiet, innocent-sounding questions would get them to reveal what they knew, or, more often what they did not know.

Pompous, arrogant people did not like this, but it was an excellent method, directed towards an excellent aim — self knowledge. Socrates was not a crammer; he wanted to develop and bring to light whatever people already had within them. That was why he said he was a midwife, like his mother, except that he was a midwife of the mind — of men’s minds, of course. Women’s minds were only thought fit for tittle-tattle, on the whole.