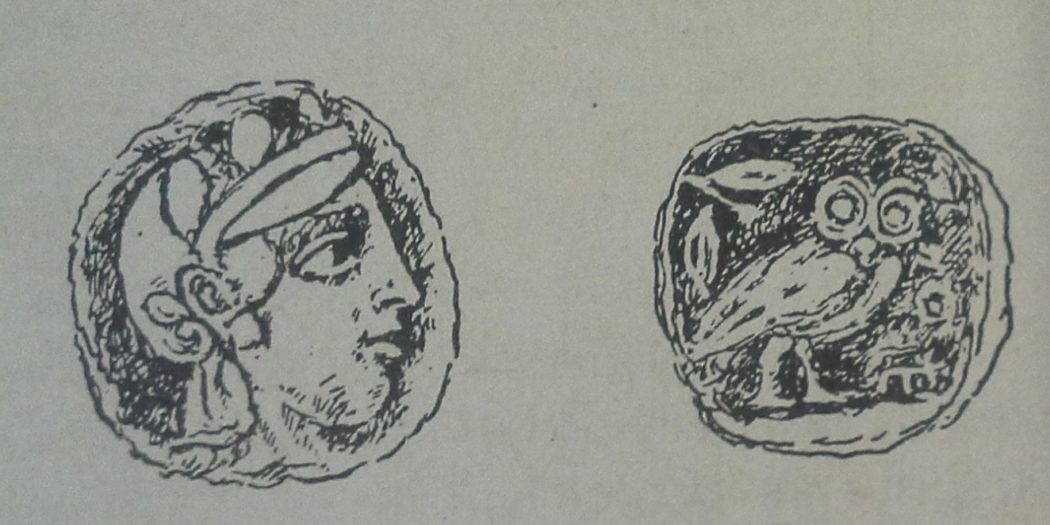 Athenian drachma. Athena’s head on one side; the owl and the olive, sacred to her, on the other. An obol (1/6 of a drachma) was similar, only smaller. The drachma was the usual daily wage of those who were paid by the day. There were no variations according to skill. Architect and labourer received the same, but there was also piece-work, e.g. 60 drachmas for a full-sized marble statue, 20 for a statue of a child. An agricultural labourer got 4 obols a day and his food. A single man could live comfortably on 120 drachma a year. There were 60 unpaid holidays in the year but of course, there were no Sundays.
Home / Hellenes - Ancient Greece / Athens

The legend of Theseus and the Minotaur suggests that Athens had dealings with Crete during the Minoan and Mycenaean Ages. We have no written history of that time, though the discoveries of archaeologists show that the Acropolis, a rocky mass 512 feet high, already had fortifications like those found at Tiryns and Mycenae.

At the time of the first Olympiad (776 B.C.) there may still have been a King upon the throne, but at Athens, as in many other Greek states, government by Kings gave way about that time to government by the nobles. Monarchy, that is to say, gave way to aristocracy. Sparta with her two Kings was an exception.

Whoever ruled Athens also ruled Attica. This was not a district of great natural riches. As can be seen from the map, much of it was mountainous and the corn grown on the plains was not enough when the population increased. However, olives and vines were plentiful and the mountains, as well as providing a home for goats and beet, contained silver mines, lead mines and marble quarries. In the river beds lay a reddish clay suitable for pottery. Finally, there were good harbours.

Attica, therefore, though not rich, had considerable natural advantages and we shall see how well she used them — how the red clay was turned into pots and the marble into temples, while the harbours were crowded with merchantmen and ships of war. The most famous product of Attica was neither animal, vegetable nor mineral. It was the form of government known as democracy.

We have now to see how democracy grew out of the aristocracy, or rule of nobles, which succeeded the period of the Kings.

The Spartans had tried to prevent one man becoming much richer than another by using iron bars as money. In this rejection of a coinage system they were exceptional. Other Greek states had begun to use silver coins, which seem to have originated in Lydia, a kingdom in Asia Minor, not long after the year 700. It was obviously useful, at that time of colonisation and expanding trade, to be able to avoid the primitive system of barter and sell goods for coins which could be easily stored, rather than for other goods, which might have to be kept in a warehouse, until it was convenient to exchange them for something else.

So wealth accumulated, but not in everybody’s purse. The wealthy, if they were shrewd, became wealthier; the poor got into debt, found themselves unable to pay and were reduced to serfdom, performing compulsory service on the land, or were sold into slavery. This was possible because, under the aristocratic system of government, the poorer people had very little power.

At the head of the government were the archons, officials who were elected annually, but no poor man could be archon nor could he take part in making laws. In fact the bulk of the people did not know what the laws were. It was considered a great advance when, in 621 B.C., an archon called Draco had them written down.

The laws of Draco were ferocious. As in Britain, during the early nineteenth century, the death penalty was imposed for quite small thefts. The word “Draconian” has passed into the English language and is applied to any system of laws which is harsh and brutal. Though the laws themselves were hard, the fact of having them written down gave the oppressed more chance of being dealt with justly.