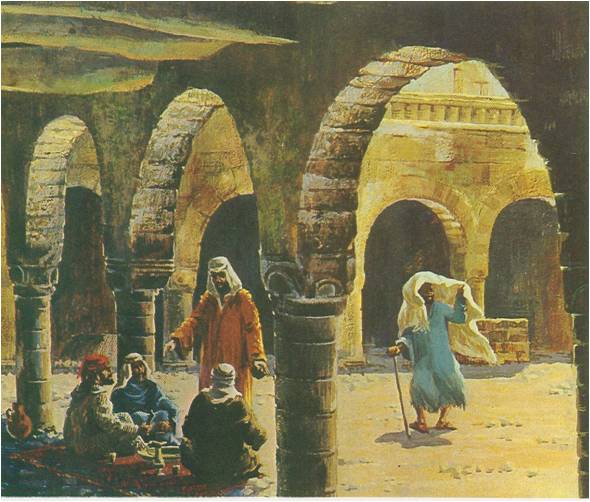 THE SELJUKS FOUNDED ACADEMIES OF HIGHER LEARNING IN ISLAM.

LIKE THEIR relatives the Mongols, the Turks began as wandering herdsmen in Central Asia. Their first contact with Islam was as victims rather than victors. When Arab armies overran the southern part of their homeland in the eighth century, many Turks were captured and enslaved. Recognizing their talent for fighting, their new masters enrolled them in their armies. In time, many of them reached high positions in the lands of their adopted religion.

About the middle of the tenth century, tribesmen from Turkistan, led by a chief named Seljuk, settled near the city of Bokhara. There they became converted to the Sunnite creed of Islam. From Bokhara, Seljuk set out on a career of conquest. His sons carried on, fighting their way slowly across Western Asia. At last, in 1055, Seljuk’s grandson Tughril took Baghdad.

Tughril left the city in charge of his officers and went away. When he came back the next year, the Abbasid capital greeted him with elaborate ceremony. The caliph, wearing Mohammed’s own cloak and carrying his cane, named Tughril “King of the East and of the West.” Officially, Tughril became al-sultan, “he with authority.” From then on, Turkish sultans of the Seljuk family were to control the caliphate for a century and a half, using the Abbasid caliphs as pawns.

As Turkish tribesmen rushed to enlist in their armies, the Seljuks pushed their conquests outward in all directions. Soon western Asia was again united — as in the days of al-Mansur, Harun and al Mamun — in a mighty Moslem kingdom. Tughril’s successor, Alp Arslan, whose odd-sounding name meant “hero-lion” in Turkish, seized the capital of Christian Armenia. In 1071 he defeated the main army of the Byzantines, taking the emperor captive. Heading west, Seljuk soldiers penetrated the valleys of Asia Minor. In this way, the Turks and the Islamic faith gained a permanent foothold in the region called Rum — that is, the Land of the Romans — which centuries later became modern Turkey.

Under Alp Arslan’s son Malikshah, who was sultan from 1072 to 1092, the Seljuks reached the height of their power and glory. The government built mosques and roads, dug canals and spent large sums on the inns lining the pilgrim routes to Mecca. Thanks to Malikshah’s able Persian vizier Nizam-al-Mulk, it founded the first well-organized schools of higher learning in Islam. It sponsored important advances in science. A meeting of astronomers, called at Nizam’s suggestion, produced a remarkable calendar, the Jalali calendar, which is actually more accurate than the one used in Christian countries today.

After Malikshah died, his sons fell to quarreling. Meanwhile, Nizam’s system of granting land to military chiefs and letting them leave it to their sons when they died, encouraged the chiefs to set up as independent lords. Lacking strong sultans, the empire began to break apart. In 1194, the ruler of neighboring Khwarizm, to the east, defeated the last Seljuk sultan of Baghdad and took control of the caliphate himself. It was this man’s son who was to flee before the advancing hordes of Genghis Khan a quarter century later and die in exile.

A branch of the Seljuks continued to rule in Asia Minor. The wealth they piled up from trade and shipping and from squeezing their subjects for taxes made them soft and sapped their fighting spirit. Instead of Turks, their army consisted of foreigners — Greeks, Armenians and Arabs — who fought only for their pay. Hulagu’s Mongols crushed these troops at Kozedagh, in 1243 and the conqueror divided the Seljuk lands between his two sons. When the Mongols’ hold weakened, various Turkish chiefs took over. They called themselves emirs‚ the Turkish equivalent of the Arabic amirs, or princes. Some emirs ruled independently, while others governed the last remnants of the once-mighty Seljuk realm.

In the meantime, the lands south of Asia Minor around the Mediterranean had acquired new masters in place of the Ayyubid descendants of Saladin. They were called Mamelukes, after the Arabic word mamluk, meaning a person who is owned by another. Most members of the dynasty began life as slaves. With power passing as often from master to slave as from father to son, the Mameluke sultans of Cairo were to rule Egypt and Syria from 1250 to 1517.

The first Mameluke was, curiously enough, a woman. Her name was Shajar and she was a freed slave of the last Ayyubid sultan. When her former master died, she seized power and in 1250 ruled for eighty days as sultana over Egypt, the only Moslem woman ever to do so. As soon as the amirs of Egypt chose Shajar’s commander-in-chief as sultan, she married him. For years the sultan was away in Syria lighting rebels loyal to the Ayyubids. Once, when he was home in Cairo between battles, Shajar heard a rumor that he was planning to marry again. She had him murdered in his bath. When her deed was discovered, she was beaten to death with wooden shoes by slave women belonging to her dead husband’s first wife.

Much the most memorable Mameluke was Baybars (1260-1279). Like Shajar, he had once been a slave of the last Ayyubid sultan. As a young general, he distinguished himself in the Mamelukes’ successful stand against Hulagu’s Mongols, in 1260 — the battle that saved Syria and Egypt from the fate of Baghdad. On their way home to Cairo, the victorious Mameluke leaders went hunting. Baybars took the opportunity to stab his sultan dead and have the amirs proclaim him sultan on the spot.

In spite of this treacherous beginning, the blue-eyed Baybars became one of the most admired of all Moslem heroes. His fame as a fighter against the Crusaders was greater even than Saladin’s. He proved to be as good at ruling as at fighting. In Syria, he stamped out the Assasins, a band of Shiite terrorists who had murdered many prominent Islamic leaders for religious reasons. He rebuilt the army and navy. He perfected the old Fatimid “air mail” system, by which carrier pigeons flew mail to its destination at astonishing speeds.

When Baghdad had fallen to Hulagu, two years before Baybars became sultan, an uncle of the last Abbasid caliph had somehow escaped with his life. Baybars brought him to Cairo and installed him ceremoniously as caliph. It was a shrewd move. Neither Baybars nor the Mamelukes who followed him were ashamed of their lowly beginnings, but many people questioned their right, as former slaves, to rule. The presence at the court of a member of the great house of al-Abbas set the minds of such people at rest. None of the Abbasid “shadow-caliphs” of Cairo ever held the slightest bit of authority; the Mameluke sultans simply kept them around for the prestige they gave the court.

After Baybars died in 1279, his successors chased the Crusaders out of Syria and checked further Mongol assaults launched by Hulagu’s Christian-minded descendants. In 1300, Ghazan plundered Syria, but three years later a Mameluke army foiled his next attempt. Nearly a hundred years after this Timur swept through Syria on his terrible rampage of 1400. He left no mounds of heads in Egypt, for the Mamelukes hastily bought peace.

Throughout the fourteenth and fifteenth centuries, the Mameluke sultans were either greedy tyrants or figureheads who were told what to do by the amirs. Most were uneducated, and one, at least, was insane. While the men in power grew rich, plague and famine killed off two-thirds of the population.

In the last years of the fifteenth century, the Mameluke garrisons in the north of Syria began to be attacked more and more often from Asia Minor. The attackers were the advance guard of a power that had risen in the Land of the Romans — the Ottoman Turks. As Sunnites, the Ottomans hated the Mamelukes’ eastern neighbours, the Shiite rulers of Persia. In 1514 and 1515, the Ottoman Sultan Salim invaded and conquered their country.

The Mamelukes were allied to the Persians by a secret treaty. Discovering this, Salim marched against them. The armies met near Aleppo in August, 1516. A Mameluke commander deserted with his troops and the aged sultan fell from his horse, stricken with apoplexy. The Ottoman victory was complete. Salim entered Damascus in triumph and took the last Abbasid shadow-caliph into custody.

The following January, Salim went south into Egypt and took Cairo. He plundered the capital and massacred all the Mamelukes he could find. The Mameluke sultan had fled to a Bedouin camp, but in April he was caught. Instead of being beheaded, as had always been the custom, he was hanged. So ended the story of one of the strangest dynasties that ever ruled in any country. 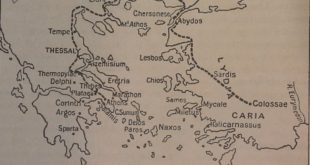