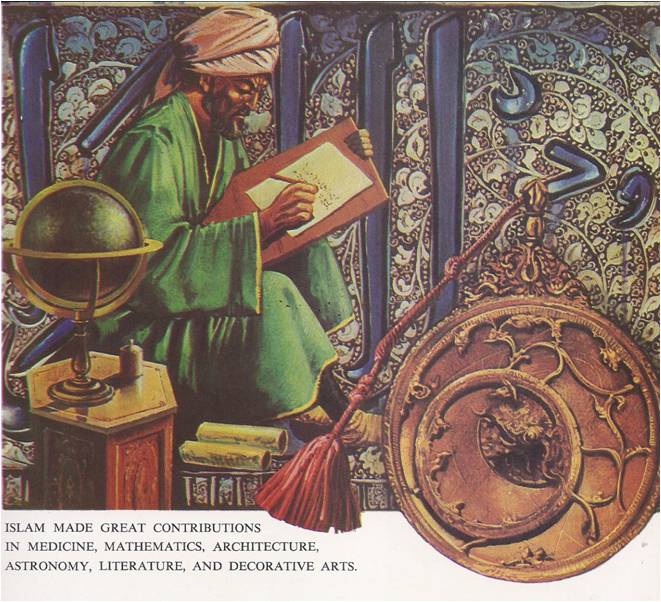 IF Islam had never existed, the Christian countries of the world would probably be less advanced and certainly less varied, than they are. For it was Moslems who gave the West many of its basic skills and ideas. From the eighth to the thirteenth centuries, the Arabs and the other Islamic peoples were the main carriers of western civilization. While Europe was torn by almost constant fighting, Moslem scholars preserved the learning of the ancient world. Other Moslems added discoveries and original works of their own. In time, translators in the parts of Europe that were in closest contact with Islam passed this knowledge on to the Christian world. It helped produce a great intellectual and artistic awakening, the Renaissance, which ended the Middle Ages and ushered m modern times.

So the West owes much to Islam. Its debt is specially great in philosophy and science. Many cultural treasures would have been lost forever if it had not been for Moslem scholarship. Among them are the works of three of the greatest thinkers of ancient Greece — the philosopher Aristotle, the physician Galen and the astronomer Ptolemy. These works are the foundations on which Renaissance thinkers built modern learning.

In one branch of science, astronomy, the Arabs’ superiority is written across the very heavens‚ for most stars hear Arabic names to this day. Example the Acrab (from aqrab, a scorpion), Altair (from al-tair, the flyer) and Deneb (from dhanab, a tail). Allied to astronomy is mathematics. Taking their cue from work done in ancient India, Arab and Persian mathematicians developed algebra, geometry and trigonometry. They also taught Europeans to use the Arabic figures instead of the clumsy numerals based on the letters of the Roman alphabet.

Unlike the ancient Greeks, who often came to conclusions by reasoning alone, the scientists of Islam patiently studied the world of nature and tested their ideas by experiments. Such experiments led to important discoveries in chemistry and physics. While trying to turn base metals into gold, Arab alchemists made so many chemical discoveries that they are regarded as the founders of modern chemistry. Other scientists evolved the theory that the world was round — the theory which led to Columbus’s discovery of America. They also made measurements of the earth which turned out to be remarkably accurate.

In medicine and pharmacy, the physicians of Islam‚ among whom were a number of Jews and Christians patronized by Moslem rulers, made considerable progress. After learning all they could from Greek and Persian texts, they learned more by practicing their profession and advanced medical knowledge by publishing their findings. They diagnosed several diseases for the first time. By trial and error, they discovered that certain plants could be used to ease the suffering of sick people. They developed important theories — that the plague spread from one person to another by infection, for example, and that blood in the human body flowed away from the heart and back to it through a complicated system of veins and arteries. These theories were not proved and accepted as true in Europe until centuries later.

The houses of early Arabia were small and crude, but the triumph of Islam brought together the architectural traditions of many nations to produce the style of building known as Arab. The best examples of this style are the mosques found throughout the Arab world — from Morocco to Indonesia and the Philippines. Simple and dignified, mosques are laid out so that the worshipers face Mecca at their prayers. Several features of Arab architecture have been widely copied in the West — notably its use of arches, domes and minarets.

Moslems believe that, since all living creatures were created by Allah, it is sinful to make pictures or statues of them. For this reason, most Arab art consist of patterns, used to decorate mosques, ornament swords and form the designs of rugs. Elaborate designs in which geometrical patterns are entwined with flowers, leaves, stars and other objects are typical of Arab art. They are called arabesques, from a French word meaning “in the Arab manner.”

Hundreds of years before Mohammed, the Arabs were already great lovers of poetry. Even though the Prophet himself disliked poetry, the writing and reciting of poems continued to be popular. Many of the Omayyad and Abbasid caliphs were very fond of listening to poems and lavished huge sums on the poets who pleased them. The Arab verses best known in the West are from the Rubaiyyat by the poet Omar Kayyam, who was also a first-class astronomer and mathematician.

Before the Arabs, other peoples had produced historians, but Arab historians raised their profession to an art. Ibn Khaldoun (1332-1406) was the world’s greatest historian up to his time. His history of the Arabs, Persians and Berbers was the first to take into account such important things as geography and climate. He has often been called the father of modern historical writing.

Of all literary works in Arabic, the best known is The Arabian Nights. Originally put together from Persian stories, this marvelous collection of tales later took in additions from India, Greece, Egypt and Palestine. Translated into many languages, this book has stirred the imaginations of countless readers, calling up an unforgettable picture of the glory that was Islam at the height of its civilization and power.