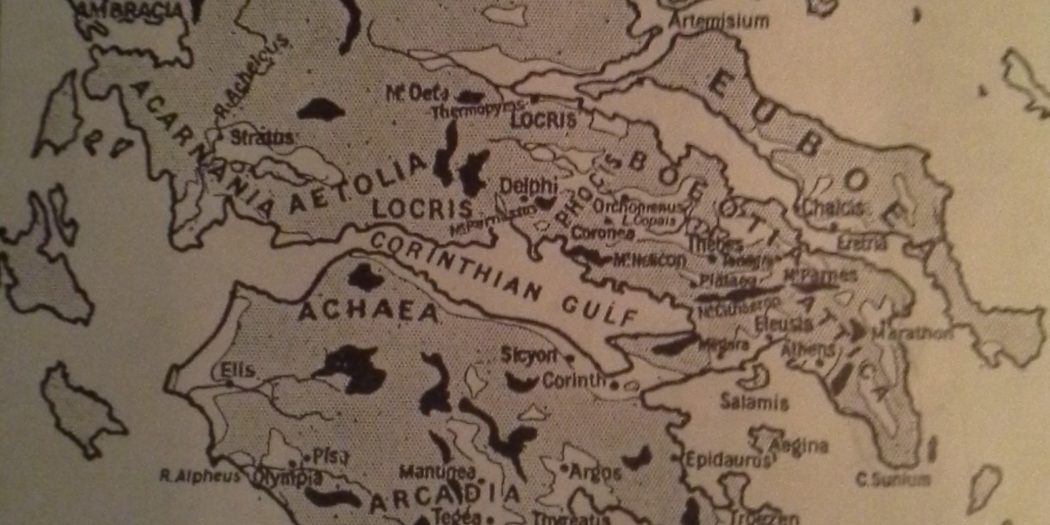 Darius I died in 486. In the last years of his life he had no need of the slave who had whispered. “Sire, remember the Athenians.” He remembered Marathon all too well and was making preparations for another attack on Greece. These preparations were continued after Darius’s death by his son Xerxes. By the year 480 an enormous force had assembled at Sardis and a fleet was ready to sail in support.

This “Persian” army and fleet was in fact made up of contingents drawn from all over the vast Persian Empire, including Ionian Greeks. The march out of Sardis was a gorgeous and gigantic pageant. Dark Ethiopians had come in leopard skins from their mysterious country in the far south. Indians in a light cotton uniform represented the easternmost territories of the Empire. From the north came Scythian bowmen in long trousers and pointed caps. Xerxes himself rode in a chariot with picked Persian cavalry and spearmen marching in front and behind.

Xerxes might well feel confident. The expedition had been carefully planned. Food and supplies had been collected along the route and a canal had been cut through the promontory of Mount Athos, so that the fleet might avoid the stormy passage round the end of it. Even the problem of crossing the Hellespont had been solved, though not without some unpleasantness. Two bridges consisting of hundreds of ships placed side by side had been built across the mile-wide strait, but they were soon destroyed by a storm. This infuriated Xerxes, who decided that the Hellespont should be brutally punished. Its waters were to receive three hundred lashes, to be branded, loaded with chains and ceremonially cursed. The penalty imposed on the builders of the bridges was less complicated. They simply had their heads cut off. Their successors were either more competent or luckier with the weather. The bridges they built held firm.

Under the shadow of this undignified outburst the mighty army moved northwards to make the crossing. On the way they passed between two halves of a man, impaled on either side of the road. This man had done nothing wrong, but his father had been indiscreet. Finding that he had won the King‘s favour by his lavish entertainment of the army, the father had been bold enough to ask what he thought was a small favour. “I have five sons,” he said. “They have all been ordered to take part in this expedition against Greece. Might not the eldest stay behind to help me?” The whole army knew the answer Xerxes had given, as they marched between the halves of the eldest son‘s corpse.

Xerxes was not a leader who inspired devotion; but if numbers alone could win, his success seemed assured. The army was gigantic. Seven days and seven nights were needed for its various contingents to ride or march or be lashed across the boat-bridges into Europe.

The threat was so serious that the Greek city-states for once succeeded in putting a united force into the field. They even hoped for help from their fellow countrymen in Sicily, but Gelo, the tyrant of Syracuse, insisted that he must be supreme commander if he came. Neither the Spartans nor the Athenians were willing to have his help on those terms. He could probably not have come anyway, since his own state was threatened by the Phoenicians of Carthage. (The Phoenicians of the eastern Mediterranan were subjects of Xerxes and he had thus been able to influence their Carthaginian kinsmen.)

No help therefore came from Sicily, nor were the Greeks of Ionia and the islands able to help their mother-country. On the contrary, they supplied part of the Persian fleet.

One of the reasons why the Greeks lived in city-states, independent of one another, was the mountainous nature of their country (refer to maps on pages 2 and 16). These mountains, however, now helped their defence. So did their jagged, islanded coastline. An invader of Greece whether on land or sea had to go through narrow places where great numbers did not necessarily give a great advantage. Narrow places proved fatal to Xerxes.