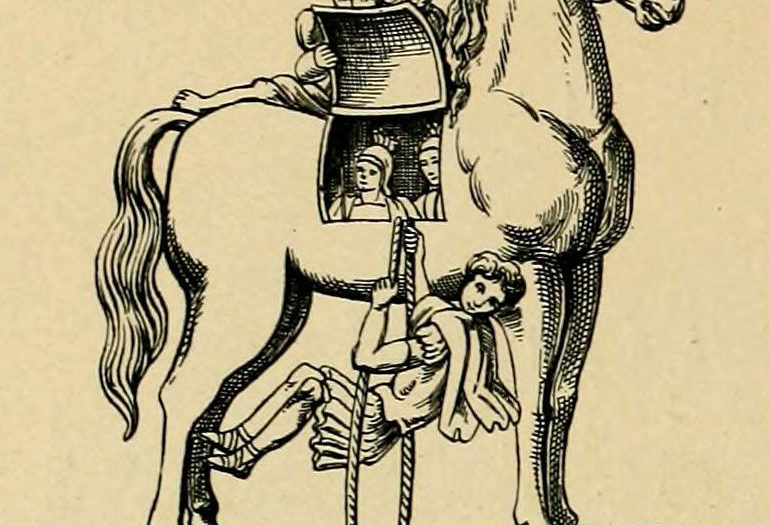 In the tenth year of the war the Greek hero Achilles slew Hector, the Trojan, in single combat. (Paris, the cause of all the trouble, never distinguished himself very much in the fighting.) The death of Hector was a cruel blow to the Trojans, particularly to Hector’s old father Priam; but they still did not surrender. In the end they were beaten by a trick.

The Greeks built a huge wooden horse, big enough to hold a number of fully armed men. They put the pick of their warriors inside the horse and left it on the shore. All the rest of the Greek army sailed away. Hector were supposed to think that the Greeks had given up hope and gone home; but in fact they had only withdrawn to an island nearby.

The Trojans streamed out of their city and strolled delightedly through the deserted Greek camp and along the shore where the Greek ships had been drawn up. The wooden horse started them arguing. Should they destroy it? Or should they drag it into their city and keep it there as a memorial of their victory?

One Trojan, Laocoon, had no doubts. “I fear the Greeks, even when they bring us gifts”, he said and threw his spear at the horse’s great wooden belly. There was a hollow sound and perhaps Laocoon would have persuaded the Trojans to open up the horse straight away if their attention had not at that moment been distracted by something even more interesting — the discovery of a live Greek.

This Greek was a young spy named Sinon. His hands were bound and he had a plausible story to tell. The Greeks, he said, had been going to make a human sacrifice of him in order to ensure that the gods would grant them a calm voyage home; everything was ready; but he had managed to escape just in time and since then had been in hiding, with his hands still firmly bound.

The soft-hearted Trojans swallowed this story whole. Sinon was set free. Everyone was kind to him and of course they asked his advice about the wooden horse; which was just what Sinon and the Greek generals had intended.

Sinon was a good actor. Now was his big scene. He put on a very worried expression, as though it grieved him to betray the secrets of the Greeks even though they had treated him so badly. The Trojans waited while he said how it hurt him to betray his countrymen, how he hated having to do it, how he never would have done it if they had not treated him so cruelly.

Hector were still waiting for advice about the horse. At last Sinon told them the “secret”. It was this.

The Greeks had been told by their priest that to ensure a safe voyage home they should make a great offering to Athena, the Goddess who had helped them throughout the war. But the offering would have to be one which could not be stolen by the Trojans. Hence the wooden horse. “Make it immense”, the priest had said, “so that our enemies cannot take it into Troy. For, if they do, we are doomed. But if the Trojans tamper with the horse where it stands, they are doomed.”

Sinon’s advice was exactly the opposite of Laocoon’s. Unfortunately there was no time for discussion, because at that moment two enormous sea serpents plunged ashore, twined themselves round Laocoon and his two little sons and crushed them to pulp. The Trojans concluded that the gods were angry with Laocoon for throwing his spear at the horse. Obviously, they thought, Sinon was right. They must bring the horse into the city. So they tore down part of the walls, fitted wheels to the horse and dragged it in.

During the night, of course, the Greeks landed again. At a given signal Sinon opened the horse and warriors swarmed out. They caused panic in the city and were easily able to open the gates for their comrades who had now gathered outside the walls.

Share
Previous Helen of Troy
Next Was there a Trojan War? 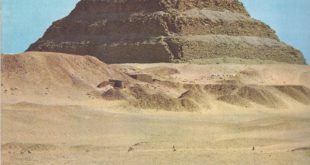